"THE ENERGIZER"
passionenergyhealth
Shop this item

You Need Garnet If...

Do you feel scattered and out of balance in any area of your life? Are you feeling disconnected to the things that usually bring you a sense of joy and peace? Do you feel like energy blockages are keeping you from being present? Are you lacking your usual vitality and life force energy? If you answered yes to any of these questions, the Garnet stone is the crystal you need.

Are you feeling sluggish and disconnected to the present moment? It's a common problem we face, thanks to the demands of modern life, which forces us to think five steps ahead. As an essential tool in the constant battle to keep it all together, the energy of the Garnet meaning helps us feel grounded and connected to the present moment. If you're lacking in energy, it could be energy blockages within the body keeping you from your natural state of joy and vitality.

The Garnet meaning is rooted in ancient history and comes from the Latin word ‘granatum’, which means pomegranate: a reference to its intense red color that resembles the glistening, deep red seeds of the fruit. The Garnet crystal was also cherished by early medieval jewelers who incorporated the stone into everything from rings and brooches to buckles and necklaces. Even then, it was more than just a fashion statement but was thought of as a protective talisman against negative energy. Possessing a special beauty all their own, the Garnet stone meaning is linked with the heart chakra, making this deep red gemstone a dark and intense contrast to your other love-attracting stones like Jade and Rose Quartz.

Just like the proverb says, “Feet on earth, head to heaven,’ repeat these words of ancient wisdom when you incorporate the Garnet crystal meaning into your daily healing rituals. Set the mood for a healing, therapeutic session with Garnet by creating a sacred space free of distractions and clutter. Laying flat on your back on a yoga mat and with your legs uncrossed, place the Garnet crystal over the pubic bone, the heart, and between the feet and begin to feel all seven chakras easing gently back into alignment. With a renewed sense of balance and a reenergized root chakra, imagine the stone infusing you with its healing light tinged with red, the shade of blood and the color that symbolizes life force energy.

As you meditate with the stone during this healing treatment, breathe in the positive energy of the universe and exhale out all the negativity weighing you down and keeping you from your full potential. When you feel your mind and body completely cleared of negative psychic debris, visualize an intention for the Garnet crystal meaning, whether it's to attract new love, find balance in a hectic world, or something else. Sit quietly with the stone and let it take away your fears, worries, and anxieties while guiding you on a path to true enlightenment. 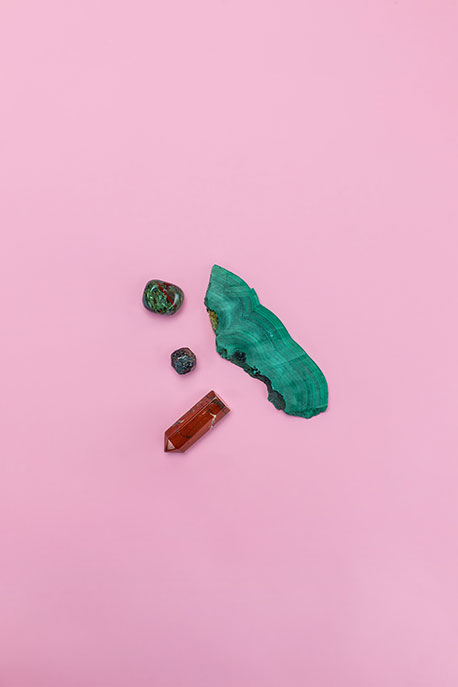 A stone that symbolizes physical love and the relationship between loving partners, the Garnet crystal meaning was used as a popular ornamental adornment among royalty and aristocrats. And all the animals of Noah's Ark can thank a large Garnet stone for providing the only light on their biblical journey and guiding them safely to land. Featured in a range of red colors, which symbolize a deeply vibrant and powerful vibration, each stone possesses a special beauty with shades ranging from ruby red and dark brown to pink and orange.

Rubies might get all the attention in the world of gemstones, but the Garnet stone meaning stands out with its earthy and subtle aesthetic. Keep a piece on your crystal shelf and let the Garnet crystal meaning represent the rich, earthy tones created from the life-giving elements of the planet. It's rich luster and unique vibration gives us the strength to take charge of our lives and make a move in the direction of progress and reaching a higher state of consciousness. Working with the Garnet meaning and uses help remind us that actions speak louder than words, a wise saying that always rings true.

Borrowing from traditional Chinese medicine, the Garnet stone supports the flow of Chi throughout the body, which boosts the detox of negative emotions that can manifest in different energy centers. Garnet healing properties bring warmth to the system, which improves circulation on a cellular level while warming and opening the heart. If you're in a relationship, use Garnet properties to deepen your romantic love. If you're single and open to romance, Garnet is a gem at enhancing the laws of attraction.

The easiest way to experience the healing properties of Garnet is to wear it as jewelry, a more earthy and subdued alternative to rare and expensive Rubies. Just like the ancient Greeks and Romans, wear Garnet jewelry as a protective talisman or amulet that shields you from negativity on your spiritual journey. Sometimes you can get in your own way, and in that case, the Garnet stone meaning also works to balance the mind and emotions by helping you discard outdated ways of thinking and giving way to a new path of abundance and vitality. Meditate daily with Garnet and discover its grounding, protective energy that leads to a higher expression of love.

In a world of passing trends and fads, leave behind societal expectations and go deep with Garnet, the stone of energy and passion that vibrates in tune with the slow and steady rhythm of the earth.

Cleansing techniques to enhance the energy of the Garnet meaning

Before you program the Garnet stone with your intention for grounding and balancing, it's important to first clear any previous programming with cleansing techniques. By charging and activating the frequencies of the Garnet meaning, its grounding and protective properties will be open and receptive to new intentions you have for the stone. When using any of these cleansing methods to activate the energy of the Garnet crystal meaning, make sure to be conscious and aware of your intention for clearing and purifying.

A wonderful tool for energy cleansing comes straight from mother nature in the form of the life-giving elements of the sun and moon. Symbolizing the steady, restorative energy of the earth, sunlight and moonlight infuses fresh vibrant energy into the Garnet properties, bringing its healing vibrations back into alignment.

Leave your Garnet crystal in the sun or under the moonlight of a full moon for at least 4 hours or more, allowing the sunlight and moonlight to burn away old energy and restore it to its brightest and most vibrant form. This cleansing process also allows you to reinforce your intention for the Garnet stone meaning to restore balance to your chakras.

When you cleanse and charge your stone, it allows the Garnet healing properties to work for you towards your intention at their full potential. If you don't have time for a cleansing session or want to add another layer of purifying effects, open and activate the Garnet meaning with Selenite. Known for its incredibly powerful purifying properties, the Selenite works by infusing pure white light into anything that it touches. As the ultimate energy amplifier, the Selenite charging plate is an effective cleansing method. With an intention to purify, place your Garnet on the Selenite for at least 4 hours or more.

Another cleansing technique to help you get the most out of the properties of the Garnet crystal meaning is with sacred smoke, which has been used by native tribes for hundreds of years. The smoke of Sage, Palo Santo, and Frankincense instantly uplifts your space with sweet and earthy aromas. The properties of the Garnet meaning also get an energetic cleanse as the sacred smoke quickly carries away any stagnant or toxic energy.

Before working with the Garnet meaning and uses, you can also clear its energy with the cleansing power of inspiring music such as classical piano, the sounds and vibrations of Tibetan singing bowls, and recordings of the ohm mantra.

Garnet in Our Blog Get the Prosperity Energy Moving with Garnet

We’d all love to invite the energy of prosperity into our lives, but before we do, we need to make sure that our spiritual space is ready for the guest of honor. A clogged energy flow and a cluttered ...

Crystals for Sex and Intimate Relationships

It doesn’t matter how many rose petals you sprinkle the bed with or how lavish your night in plans are—when it comes to setting the mood for great, intimate sex, you need to start by stirring the ener ...